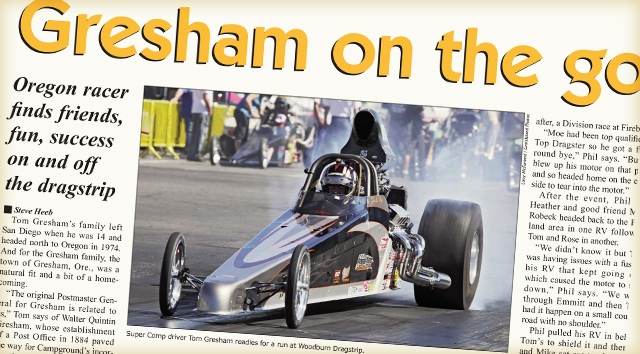 Gresham on the Go

Oregon racer finds friends, fun, success on and off the dragstrip

Tom Gresham’s family left San Diego when he was 14 and headed north to Oregon in 1974. And for the Gresham family, the town of Gresham, Ore., was a natural fit and a bit of a homecoming.

“The original Postmaster General for Gresham is related to us,” Tom says of Walter Quintin Gresham, whose establishment of a Post Office in 1884 paved the way for Campground’s incorporation as a city in 1905.

Campground was renamed Gresham in honor of the Civil War general, US District judge, and two-time Republican presidential nominee and his service as U.S. Postmaster General under President Arthur.

When Walter Q. Gresham first offered his store as a Post Office, the Benz Motorwagon had not even been built yet. When Tom and his family arrived in Gresham more than a century later, the automobile had reached maturity on the road and at the race track.

“Sam let me license in his Super Comp dragster and the rest is history,” Tom smiles.

Soon after, Tom purchased a ’88 Neil & Parks dragster so he could go racing himself.

“It’s always challenging,” he says of the early seasons. “I ran that for five seasons and started looking for a faster car.”

“I originally helped build the car in Scott Bacon’s shop,” he explains. “I sold the other one soon after that.”

He says the racing was more competitive eight years ago.

“I won the first race I entered at Bremerton,” he recalls. “I’ve won 11 Wallys since switching to the Yancer. Two of the wins were at Boise and the rest are from Bremerton and Woodburn.”

Tom teams up with Phil and Heather Gilbert in Super Gas, and Moe and Brenda Tujillo, who have been leaders in the Division 7 Top Dragster ranks for a few seasons.

The friends race at Division 6 tracks throughout the Northwest including Mission Raceway Park, Pacific Raceways, Woodburn Dragstrip and Renegade Raceway, but Tom confesses it has been a while since they’ve been to the Yakima strip.

Tom won back-to-back NHRA events at Firebird during the 2013 and 2014 seasons, as well as an impressive streak of five races at Bremerton Raceway, with other victories at Woodburn.

“They are really nice tracks,” she says of the venues where Tom competes. “They all are, but those especially.”

Phil recalls some misadventures for the group during, and after, a Division race at Firebird.

“Moe had been top qualifier in Top Dragster so he got a first-round bye,” Phil says. “But he blew up his motor on that pass, and so headed home on the early side to tear into the motor.”

After the event, Phil and Heather and good friend Mike Robeck headed back to the Portland area in one RV following Tom and Rose in another.

“We didn’t know it but Tom was having issues with a fuse in his RV that kept going out, which caused the motor to shut down,” Phil says. “We went through Emmitt and then Tom had it happen on a small country road with no shoulder.”

Phil pulled his RV in behind Tom’s to shield it and then he and Mike set out to change the fuse in the side compartment and get the caravan on the way again.

“This happened a few more times once we were back on I-84 westbound and happened again about 20 miles east of the Biggs Junction,” Phil says of the crippled 38-foot RV shutting down on a section of highway with virtually no shoulder between the road and a metal guardrail. “Tom beached his dead RV so tight to the guardrail that we couldn’t get to the fuse. It was kind of comical, I got up on the guardrail and was trying to rock his RV enough to where Mike could time it just right to get the side compartment door to swing open and get us access to the fuse.  No chance – the coach weighed too much.”

They finally decided to disconnect Tom’s RV from the trailer.

“Mike and I worked like dogs to literally push the RV forward so that Tom could steer it out enough from the guardrail so we could get to the fuse,” Phil laughs. “The icing on the cake was that he still kept it so tight to the guardrail that we had to do the ‘me standing on the guardrail rocking the rig’ trick to get the door open.”

Tom says Moe runs his own repair shop and brings his mechanic expertise to the team, though he has a tendency to be tardy.

“He always shows up late,” Tom explains, citing the Nevada trip last year. “He got to Fallon at 1 a.m. on Thursday night. Then he goes and wins the event.”

Phil says work commitments do not allow him to race as often as Tom and Moe do, but says that Tom would be described as the quiet one among the three.

“He is extremely calm and steady even in the money rounds,” Phil says of Tom’s consistent reaction times.

During the eight years they’ve raced together, Phil also notes Tom’s improvement in racing at the finish line.

Tom says Phil is known for having trouble-free equipment, but does recall some adventure during a road trip to Las Vegas.

“Phil lost a tire on the trailer and it passed him up,” To laughs. “That’s the biggest trouble he’s had.”

Phil recalls the one time he fielded his Super Gas car in a Super Comp Association race in 2009, and actually eliminated Tom in the first round at a time when Tom had been leading the SC points.

“He refused my offer to purposefully lose,” Phil laughs, eventually notching a runner-up for the event.

One special road trip for Tom and Rose came at the end of the 2013 season, as they loaded up the 24-foot trailer and made the 2200-mile trek to Chicago for the Jeg’s All Stars race.

“Chicago was a long trip,” Rose laughs. “But he loves to race and tries to make them all.”

“It definitely was a long way there,” Tom laughs. “But it was great – real relaxing. It’s a beautiful facility.”

Tom was top qualifier, but did not go many rounds during the Chicago trip.

Tom bought a new motor for the 2015 season, and the 584-cid powerplant is doing well.

With a win at Pacific Raceways, Tom is knocking at the top of the Pacific Northwest Super Comp Association standings.

Also with rounds at Mission Raceway Park and Sonoma, Tom is in the hunt for the Division 6 Super Comp title.