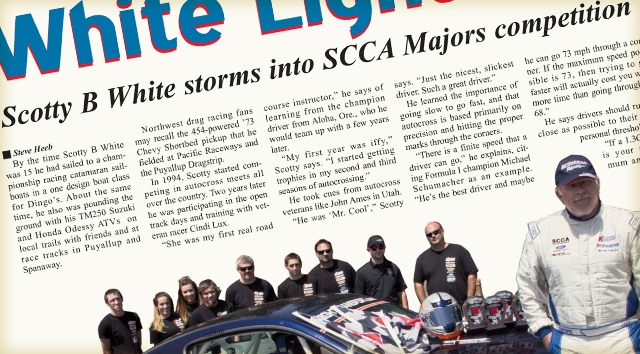 This feature article was published in the Midseason 2016 issue of Inside Track.

By the time Scotty B White was 15 he had sailed to a championship while racing catamaran sailboats in a one design boat class for Dingo’s. About the same time, he also was pounding the ground with his TM250 Suzuki and Honda Odessy ATVs on local trails with friends and at race tracks in Puyallup and Spanaway.

Northwest drag racing fans may recall the 454-powered ’73 Chevy Shortbed pickup that he fielded at Pacific Raceways and the Puyallup Dragstrip.

In 1994, Scotty started competing in autocross meets all over the country. Two years later he was participating in the open track days and training with veteran racer Cindi Lux.

“She was my first real road course instructor,” he says of learning from the champion driver from Aloha, Ore., who he would team up with a few years later.

“My first year was iffy,” Scotty says. “I started getting trophies in my second and third seasons of autocrossing.”

He took cues from autocross veterans like John Ames in Utah.

“He was ‘Mr. Cool’,” Scotty says. “Just the nicest, slickest driver. Such a great driver.”

He learned the importance of going slow to go fast, and that autocross is based primarily on precision and hitting the proper marks through the corners.

“There is a finite speed that a driver can go,” he explains, citing Formula I champion Michael Schumacher as an example. “He’s the best driver and maybe he can go 73 mph through a corner. If the maximum speed possible is 73, then trying to go faster will actually cost you way more time than going through at 68.”

He says drivers should run as close as possible to their own personal threshold.

“If a 1.3G-load is your maximum and you step over it you are going to lose control,” he says. “And you’ll never make up the time you lose for that mistake.”

He worked on being smoother and more deliberate as he raced the clock on the autocross course. Scotty joined more than 1,000 drivers in Topeka, Kan., for the SOLO championships from 1994 through 2006, winning Solo II and Pro Solo championships along the way.

But Scotty laughs that it was in 1997 that he turned his first wheel in anger in wheel-to-wheel competition. That’s the year he earned his Novice SCCA road race and Porsche club licenses and got a taste for the longer road courses at Pacific Raceways, Portland, the old Las Vegas track and Sonoma in his ’90 911 Carrera II with the stock seat, roll bars and a 5-point harness.

“There were all the same principles at 140 as there are at 70,” he says of the much faster speeds on the road course. “But if you get it wrong you risk writing off your car.”

He notes that those with autocross backgrounds usually make for good road racers.

“They are excellent planners, not just young and relying on reflex,” he says of the importance of being calm while racing. “A lot of drivers’ heart rates go crazy. I’m totally relaxed as long as I trust the other guys.”

He laughs that racing is the polar opposite to what is portrayed in the Fast & Furious movies.

“It’s like walking on a roof – you can’t go at it halfway, you have to stand up and commit to walk upright with confidence otherwise you’ll slide off,” he says. “Road course racing takes more money and balls than autocrossing. You have to be confident and brave. You have to commit fully.”

In 1998, he joined a few others committing to the SCCA’s brand new Touring 1 class for sports cars.

“This was for high-powered two seaters,” he says of fielding his C4 Corvette in T-1. “I was driving my 300-horsepower Corvette against 450-horsepower Vipers.”

The SCCA Runoffs class was small that year, with only 4-5 cars and he recalls suffering frequent mechanical problems trying to stay competitive against the stronger cars.

Success came the following year when Scotty notched his first pro win during the World Challenge at the 1999 Molson Indy race in Vancouver, BC, in his C5 Corvette which led to sponsorship from General Motors.

In 2003, Scotty and Cindi Lux teamed up to run their Corvettes for two seasons.

“We really challenged each other in a good way that made us both better drivers,” Cindi says of competing in the same classes. “I had a huge amount of respect for him when we raced against each other.”

In 2005, they signed on with Dodge to run a pair of Vipers in T1 competition.

“He and I had some great races where you couldn’t put a piece of paper between us,” Cindi says. “But the one who won always really deserved it that day.”

By the end of the 2007 season, Scotty had tested his mettle in Utah, Sacramento and San Diego.

In 2008, Scotty took a break from racing but still had an impact on his racing partner.

“I got the Mopar deal and Scotty took some time off, but he loaned me his transporter,” Cindi explains. “He was a true gentleman and very generous.”

Scotty took four seasons off from driving, to focus on business and launching his daughters into life getting through high school and into college.

When he resumed driving, Scotty was up to speed right away.

“I’ve always been good at the road courses,” he says. “When I ran the first Legends road race at Portland I was so much faster than the group. I was knocked off the track and fought back to the front three times.”

“He’s got a lot of passion and works very hard,” Cindi says of Scotty’s drive. “He’s a thinking race car driver. And he’s only gotten smarter.”

She says some race fans might look at Scotty’s size and assume he would drive harshly, when the opposite is more true.

“He has the finest touch,” she describes his racing finesse. “He’s really in tune with what the cars need and doesn’t abuse the car at all. I would race an enduro with him any time.”

On the long 5-mile Thunderhill course, Scotty powered his Mustangs to track records in both the T-3 and T-4 classes.

He has plenty to thank for his fun: BF Goodrich, Hawk Performance, Knight Transport LLC, GipsonMotorworks and Team Extreme CMT.

“We’re proud to help with engine development for Scotty,” says GipsonMotorworks owner Mike Gipson. “I’ve known him more than 30 years. We went to Ohio together and laughed so much because we are essentially the same people. He’s really a good guy.”

“Using AIM data analyzed by Jerold Lowe of Motorsports USA has upped our game,” he says. “We can change a line just a bit and can see what happens with predictive lap times.”

Sometimes the biggest challenge can be prepping the car on a race day with changing weather.

“Steady rain is no problem – it’s on and off that’s the toughest,” he says of deciding between running dry tires or the wet package. “Rain tires still have to get warm, and even dry tires will grip a wet track if you get heat in them.”

More than just swapping the tires, the car’s suspension also is adjusted for wet track conditions.

“We adjust the alignment if we know it’s going to be wet,” he says of prepping the car to be looser. “We soften the car’s suspension, then use automatic dampeners to try and keep the car as stiff as possible.”

When the SCCA Majors took over Pacific Raceways for the Memorial Day weekend, there were both wet and dry sessions, but it didn’t seem to bother Scotty, who collected five wins and a runner-up competing in the T-3, T-4 and GT-2 classes. He also turned some laps in the T-1 and T-2 sessions to earn enough points to qualify for the SCCA Championship Runoffs in Ohio in September.

No one wants to see Scotty pull off a championship more than Cindi, who has watched him at several SCCA Championship runoffs along the way.

“He’s been so close at the runoffs so many times and in so many classes,” she says, keeping track of his progress more than a decade after they raced Corvettes and Vipers together. “We keep in touch and still help each other out with car set up.”

Like those who have helped guide his racing program to where it is now, Scotty works to help develop other drivers.

“We try to help a few new kids along when we can,” he says, citing Kyle Byers as an example of a new talent to watch.

Two other up-and-coming drivers are following in their dad’s footsteps.

“My daughter Hannah got her Novice license and is starting her own road racing career,” he smiles.

And you can bet he’s advised her: you need to go slow to go fast.