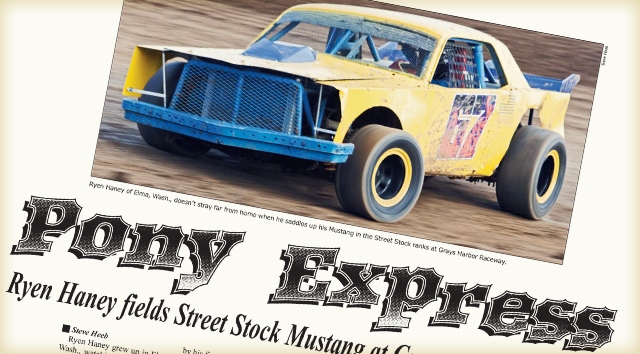 “We got it half built before we gave up and took up riding quads,” Ryen recalls.

When the family needed to move, the project was again on the front burner.

“We had to finish the car,” he explains. “Just to get it out of the garage.”

“I was the Hobby Stock rookie of the year that season,” he says of the 2010 campaign at Grays Harbor Raceway. “The class is now the Street Stocks. It’s become more standardized with other tracks.”

He also hauled south to Coos Bay Speedway to improve his racing.

“I went down there to learn patience,” he explains. “And work on not pissing people off.”

He admits he made it tougher on himself than needed.

“It’s been a long lesson,” he reflects. “I ignored everything dad said back then.”

With more seasons under his belt, Ryen has seen the improvements.

“I used to be totally out of control,” he laughs. “Now I am a lot smoother.”

Ryen also has kept an eye on other talented drivers at the track, especially Jack Parshall Jr.

“He’s so smooth and never over-drives his car,” Ryen says of the veteran. “He’s always fast, but doesn’t try to take more than the car will give.”

In addition to Grays Harbor Raceway and Coos Bay Speedway, Ryen has competed at Skagit Speedway and Sunset Speedway.

“Coos Bay is the most fun, but Grays Harbor will always be home,” he says.

He also notes he hasn’t had a chance to test the dirt at Willamette Speedway and Cottage Grove Speedway.

He is grateful for unshakable support from parents Chip and Gloria, though he recalls an incident that put his mom to the test.

“Dad and I broke down while on our way to the Dunes,” he says of a spring road trip that happened to be on April First. “I called my mom but she didn’t believe me.”

Eventually she was convinced and came to their rescue.

He ranks his late sister Shella Graham as his biggest supporters up until her recent death in May.

Ryen still drives the same Mustang in the Street Stocks at Grays Harbor Raceway, now powered by the third motor since he started.

“I’m still getting everything figured out,” he says. “I’m back in it full time so I have to re-teach myself some things.”

He’s still working on being smooth and patient, and following the advice he received long ago.

“Hold your line – the fast guys will go by you,” he counsels new drivers. “Trying to get out of their way is what causes problems.”

And his solution: “I try to run up front as much as I can.”