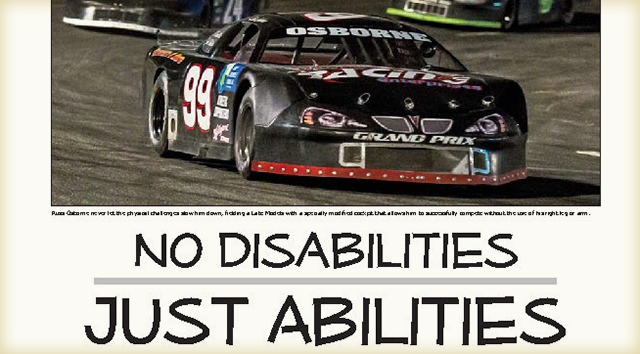 This feature article was published in the May 2017 issue of Inside Track.

February 27, 1964: Russ Osborne was born the fifth son in a large family. The boys were all athletic and competitive, so by the time he was seven years old Russ was playing hockey and baseball. Within two years, he was on the advanced teams for both sports.

On February 17, 1980, while playing on a Midget A hockey team (representing the greater Spokane area), he was slammed into the boards and his helmet failed when his head hit a metal standard. His jaw was shattered; he suffered multiple skull fractures as well as collarbone and shoulder injuries.

A tracheostomy tube was inserted and remained in place for over 100 days and over the next weeks and months, he underwent a number of surgeries to relieve pressure on his brain and repair as many injuries as possible.

He was in and out of a coma for four months, during which time doctors told his family that if Russ came out of the coma, he very well could be in a vegetative state for the rest of his life. There was little to no chance of his ever walking again.

Russ very quickly proved the experts wrong, and managed to catch up with is high school classmates and graduated on time. At that point, his greatest ambition was to get out of his wheelchair and walk across the stage to accept his diploma … and he did!

At 17 he started driving a truck with a standard shift. After graduation, he joined a gym and worked out every day. He never lost his drive to compete even though he could no longer play hockey, baseball or football.

In 1987 he contacted local race car driver/instructor Bruce Garber and asked how hard it would be for him to race. Bruce agreed to help him and after a short demonstration Bruce set him in the driver seat.

Since the left side of his brain had stopped functioning, his right hand and leg are paralyzed. But that hasn’t kept him from competing and winning, having learned to make the best use of his left arm and leg.

Once his crew settles him into the driver’s seat of his highly modified cockpit, and with the help of a high powered automatic shifter on his left side, he takes control and powers around the track with the best of them.

He returned to the track in 2006. Because he has never lost his competitive desires and continues to actively pursue his dream, his record is enviable:

n He ran in the NASCAR sanctioned ICAR series for seven years. In each of those seven years he placed in the top-10 for his class of 25 cars.

n Once the ICAR series folded, he began racing at Stateline Speedway, where he placed in the top-10 every year. His best outcome was third place overall.

n In 2016 he was driving two NASCAR-type ­Pontiacs. He is set to team up with Dave Garber, son of his original mentor, Bruce Garber. Their hope is to represent the Special Olympics with the support of generous donors and sponsors.

Russ lives independently and personally funds the Russ Osborne Memorial hockey trophy which is given annually to the most outstanding hockey player in the midget division. He is a strong Christian who has survived and lives by the grace of God. On the back bumper of each car he drives is that statement “Have faith in God”.

Russ lives by the motto “No Disabilities–Just ­Abilities” which is printed on the side windows of each of his cars. He is always willing to meet his fans, never fails to take the time to autograph photos or talk to children who are thrilled to meet a real race car driver. He even at times allows them the joy of sitting in the driver’s seat of the race car.