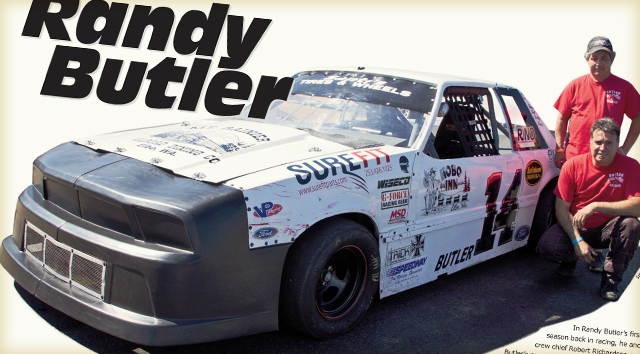 Randy Butler: Back in Action

Randy Butler of Tacoma, Wash., kicked off his racing career in 1985 at Spanaway Speedway.

He was working for Dudley Shenkel at Dudley’s Tire and had a chance to practice in the company’s ’72 Pinto race car.

“Dudley asked if I wanted to run it,” Randy laughs. “I said: Damn right!”

Getting the most out of the car was not a problem.

“As a welder and fabricator by trade I knew my way around tools,” he explains. “Knowing how things work gives me an advantage.”

He fielded the Pinto with the No. 43 during his first season, followed by two seasons in the No. 21 Mustang.

“That has always been my favorite,” Randy recalls fondly of the Mustang Mini Stock.

Randy had logged seven seasons in the Outlaw Compacts and Mini Stocks divisions, competing at Northwest race tracks in Port Angeles, Ephrata, Tenino and Yakima before stepping away from racing.

After a lengthy hiatus, Randy caught the racing bug again during a trip to Yakima at the end of the 2014 season.

“I had been trying to get Randy to the races for some time,” says longtime friend and crew chief Robert Richardson. “We ended up going to the Fall Classic and saw a car he had built.”

Josh Childress was driving the Mustang that Randy had built more than 25 years earlier.

“I really liked seeing him do well in a car I built,” Randy said of seeing his Mustang in action at Yakima.

Randy bought an ’83 Mustang from John Morse and set to work personalizing the car to compete in the Northwest Outlaw Super Series.

“You don’t just buy a car and go racing,” he laughs. “We re-did the seat, steering and added skirts and a spoiler.”

Randy says the No. 14 car has always been a front-runner, but that success doesn’t come without effort.

“We spend four nights a week working on the car,” he says.

“You get out of it what you put into it,” Robert agrees. “Randy’s been able to pick up right where we left off.”

In 2015, Randy was eager to add the Wenatchee Valley’s Super Oval to the list of tracks where he has competed.

“Wenatchee is a lot like Spanaway,” he reflects fondly on his racing roots at Spanaway and South Sound Speedway. “Tenino is a little different now, but I’ve been there many times. It’s a better track now.”

And Randy has improved as well.

“We set a goal that we want a championship,” Randy said when the NWOSS fleet buzzed through his home track South Sound Speedway.

By the time the dust had settled on the 2015 season, Randy had indeed notched the Tenino track’s Mini Stocks title.

“I just thank Robert for getting me back into racing,” Randy says. “And I would encourage anyone to try racing themselves.”