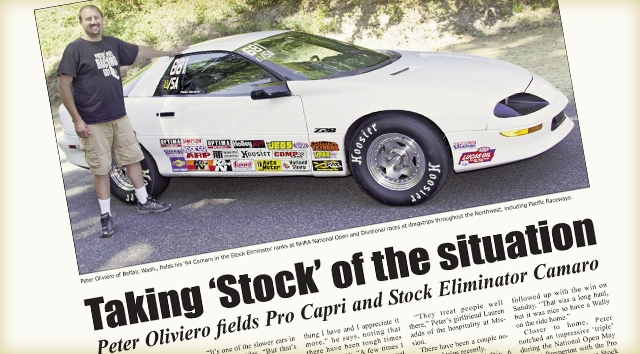 Taking ‘Stock’ of the situation

Peter Oliviero has been drag racing since 1997, when his curiosity led him to field his ’84 Mercury Capri RS which he had bought the year before. His first few seasons at the dragstrip were a learning experience for the young driver.

“I did not understand what I was doing the first five years,” he reflects. I never had anyone teach me. I had to learn it all on my own.”

In the 19 years since, Peter has logged plenty of seat time and benefitted from experience.

“If I knew then what I know now, who knows what I could have done,” he laughs. “But better late than never.”

He knew his Capri was not the quickest car in the staging lanes, with early runs around 16.40. Peter now turns laps in the mid-12s.

“It’s one of the slower cars in Pro,” he concedes. “But that’s part of the challenge.”

In 2008, Peter overcame that challenge and collected his first Wally with a win in Sportsman during a National Open at Bremerton Raceway.

“That was special because it was against Jody Lang,” he says. “Jody is world-class, one of the best racers in the country.”

“I was doing well with the Capri at Bremerton and decided I wanted to compete at another level,” he says. “I’m one of the youngest guys running the class on my own dime.”

“I’ve had to work for everything I have and I appreciate it more,” he says, noting that there have been tough times along the way. “A few times I was about to throw in the towel but then I did well in the end.”

He cautions those just starting into the sport to avoid getting in over their head.

“It’s right about sea level,” he says of the dragstrip in British Columbia. “It’s nice with a good atmosphere.”

“They treat people well there,” Peter’s girlfriend Lauren adds of the hospitality at Mission.

There have been a couple notable road trips recently.

In 2011, Peter and Div. 6 champion Mark Faul ventured to the Divisional and National events in Sonoma, Calif.

The race day for Peter was short, but he says it was great to see success for elite Northwest drivers as Mark topped the Super Stock field at both the Divisional and National events, and Jody Lang also notched Wallys for both weekends in Stock Eliminator.

“I almost got the double at Medicine Hat,” he says of his runner-up finish on Saturday followed up with the win on Sunday. “That was a long haul, but it was nice to have a Wally on the ride home.”

Closer to home, Peter notched an impressive ‘triple’ during the National Open May 9-10 at Bremerton with the Pro win Saturday and Super Stock wins both Saturday and Sunday.

“The triple was the highlight of my racing so far,” he beams. “It was a very special day.”

“It was incredible,” Lauren says.

“Wallys are something really special,” Peter reflects. “ Racing for 18 years and winning two, then putting your heart into a season and winning four back-to-back is really something special.”

Peter continued racking up National Open experiences when he and Lauren made the trek to Lewistown, Mont., in August.

After racing the majority of the National Open Series, Peter was recognized as champion in both the Stock/Super Stock and Pro classes during the NHRA Division 6 banquet in January.

“It was a very rewarding accomplishment,” Peter says. “All my hard work finally paid off.”

He plans to compete in both Division and National Open races again this year.