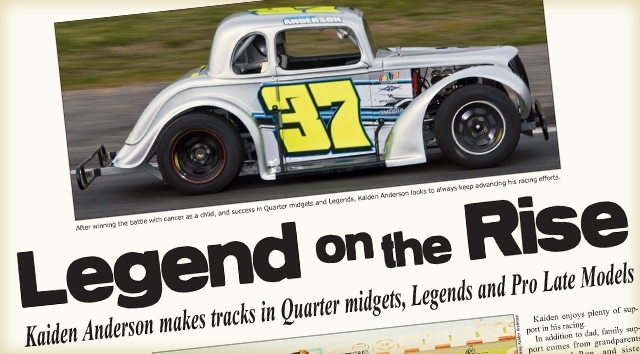 This feature article was published in the April/May 2020 issue of Inside Track. You can read the whole issue at this link.

Legend on the Rise

Kaiden Anderson faced his toughest competition younger than most.

The driver out of Yakima, Wash., was diagnosed with Stage 2 Neuroblastoma when he was two months old and battled that until he was 2.

“I’ve been all clear since 2003,” Kaiden says. “One side effect was no sports, but racing fits right in.”

He had great support from his father, Ron Anderson Jr., who had fielded the 37 cars in Yakima’s Street Stock and Bomber divisions.

“I started when I was 8 and ran Quarter midgets for six years,” he says. “We raced all around the Northwest.”

Kaiden started Quarter midgets powered by a Honda GX120 engine in Junior Honda, followed by a GX160in the Light 160s.

In his third year, Kaiden jumped to the Light World Formula division, with a more powerful Briggs & Stratton engine.

“In my first race I advanced from the B-Main to start seventh in the A-Main,” Kaiden recalls. “The car became a rocket and I won by half a track. Since then I knew I wanted to race.”

During those six seasons in Quarter midgets, Kaiden notched multiple regional victories. He racked up 11 championships and placed second and third at national events.

At 15, Kaiden began racing a Legends car in the Young Lions division.

“The biggest difference between the Quarter midgets and Legends cars is the speed and handling,” he reflects. “Quarter midgets are easier to handle and they have no clutch. I had to get used to the clutch in the Legends and focus on steering.”

He says his dad was a huge help in transitioning to the faster racers and bigger tracks.

“He taught me stuff like driving lines and pick up points on the throttle,” Kaiden says.

“He is my mentor,” Kaiden says. “ He sets the cars up and shows me how to do it. Without him I couldn’t do this.”

He says Chance offered him the best advice early on.

“I had been using the clutch on my starts,” Kaiden explains. “Chance showed me to just lift off the gas and shift to keep momentum at the start.”

Kaiden also learned from competing with long-time veterans like Randy Schaaf, who has multiple state championships since starting in the Legends in 2000.

“Randy is quick everywhere,” Kaiden laughs. “He’s been in Legends as long as I’ve been alive.”

“I race for these young guys,” Randy says. “I like to be a mentor for them.”

“Beating Randy would be quite an accomplishment,” Kaiden said of his goals at the time.

All the advice paid off as Kaiden won the Young Lions championship that year and made a trip south to Las Vegas for a national qualifying event.

“There were 30 cars there and they were all quick,” he laughs. “It was my first year and it was really exciting.”

There certainly was no Sophomore slump for Kaiden, who certainly made the most of his second season in the Legends.

Kaiden snagged the (2017) Semi Pro championship for Washington state, finished fourth in the Race of Champions at Nationals, and ended with an 8th-place finish in the National Championship race.

He also placed third in the National Traveling Series, having competed at 10 different tracks throughout the Northwest including Wenatchee, Puyallup/Graham, Monroe, Elma, Yakima, Portland, Hermiston and Meridian.

Kaiden recalls some extra excitement during the 2016 Fourth of July weekend at Meridian.

“They shot off fireworks in the parking lot and they were landing on our cars in the pits,” he laughs.

Kaiden’s travel time was trimmed the following year, only competing in eight races, on the podium for each with three wins, four runner-ups and a third place.

Kaiden enjoys plenty of support in his racing.

In addition to dad, family support comes from grandparents Carrie and Ron, and sister Mykala.

“Jerod has been a great crew guy and has helped me tremendously,” Kaiden says.

Kaiden thanks Chance at Kustom Fab and Dave Winchell, who helps with tires on the Legend.

He adds that Jim Schimmel was a great help while they were competing in Las Vegas.

“Caity races out of Meridian, Idaho and they have become great friends of mine,” he says. “They even came and helped out during my first Pro Late Model race.”

Kaiden knew he was ready to jump into full-size race car when he accomplished one of his big goals for the Legends, finally beating Randy in an exciting race at Meridian in 2018.

“At that moment right there. I knew I had accomplished a lot in racing,” Kaiden says. “Beating one of the very best to race Legends.”

“I was super fast at the Fall Classic,” he says of Yakima Speedway’s prestigious late-season event. “I was in the top 5 out of 38 cars with less than 10 laps to go, but ran out of fuel with  one lap left.”

If the season ever gets underway, Kaiden hopes to get 10 races in 2020.

“First on my list is Apple Cup and I cannot wait,” he says of the chance to return to Yakima Speedway. “We have tested a couple times and I feel like we have a winning car.”

Here’s hoping Kaiden, and all the Northwest drivers, have a chance to hit their favorite tracks again as soon as possible.