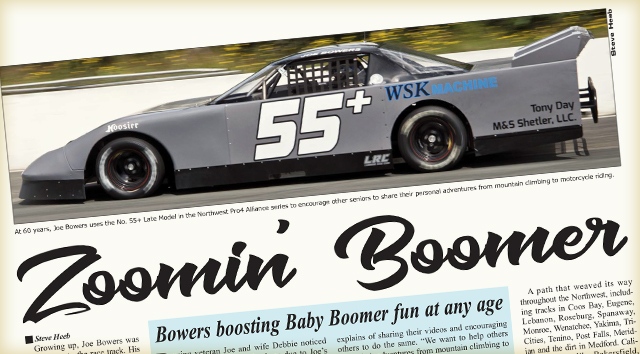 This feature article was published in the June/July 2018 issue of Inside Track.

Growing up, Joe Bowers was no stranger to the race track. His father John raced Hardtops and his brother raced at Klamath Speedway as well.

“Jack was a big influence,” Joe says of helping on his brother’s Hobby Stock car. “I knew I had to get my own car.”

In 1976, Joe was ready to field his own’64 GTO convertible that he ran in Hobby Stocks for a season.

The next year he ran Street Stocks with a ’69 GTO.

“I would put the big tires on it to run with the Supers,” he says of always trying to expand his racing resume.

For several seasons Joe kept busy behind the wheel and trying to raise funds.

“I was still learning but I wanted to be a pro,” he says. “I had to have money and experience.”

Then a brand new series caught his attention: The Nascar Northwest Tour.

Joe ran full-time during the Northwest Tour’s inaugural 1985 season, competing in 14 of the 15 races on a schedule that included venues in Oregon, Wahington, Nevada, Idaho and California.

He finished in the top 10, in a field made up of the region’s top drivers including Derrike Cope, Dirk Stephens, Chad Little, Ron Eaton, Bob and Leon Fox, Rick Shultz and the series’ very first champion, Garrett Evans.

After a quick breather, Joe was back at Klamath Speedway to earn the Sportsman title in 1988.

“They used to have a $500 bounty for anyone who could beat him,” Debbie laughs. “They even ran an ad in the Nickel paper.”

Joe says that when the season ended, he was given the unclaimed bounty.

He followed up with a second consecutive title in 1989 and earned the track’s Most Popular Driver recognition.

In 1990, Joe put in another full-time effort with the Northwest Tour, including a top-5 finish at South Sound Speedway in which he led 88 laps.

He continued to travel the West Coast from 1991 to 1995 racing in Late Models, Open Comp and Sportsman events in Oregon, Washington, Nevada and California.

In 1994, Joe and wife Debbie decided to have some fun with the No. 1 car while raising some money for their racing efforts in the NorCal series.

“We wanted to involve the kids so for $5 they could sign a vinyl hand and we’d put it on the car,” Joe explains. “The car was orange and blue with white hands plastered all over it.”

“They looked like butterflies all over the car,” Debbie laughs.

Joe credits Dick Mauro, car owner and sponsor, for matching the money from the hands promo and other sponsorships received.

With the car being No. 1, he also says it was natural to have foam finger hands for the fans in the stands.

Joe and Debbie also produced a newsletter that they sent out to keep their junior fans up on Joe’s racing successes.

Their efforts paid off as Joe won the NorCal Series championship that year.

In 1996, Joe put aside his racing suit to start his own business building street rods as Bowers Race and Rod Shop.

Almost a decade would pass before the next generation of Bowers were ready to race. Joe’s three sons – Nicholas, Will and Clint – shared seat time in a Mini Stock they built for the 2002 season at Douglas County Speedway.

Joe was back on the track the following year when the family got a second car and alternated which pair would drive each week.

The following year Joe and Clint each ran one of the cars full time, and Joe picked up the 2004 Mini Stocks title, and successfully defended his title in 2005 with father-son finishing 1-2 in the season points.

After that, the family put Clint in a Modified for a season at Roseburg, but soon other priorities pushed racing onto the back burner.

However, so many experiences were centered on racing that they couldn’t shake it.

“Our family spent so much time together on the road,” Debbie reflects on their racing adventures. “They still like to road trip, and we all have to travel together when we go. We even scheduled our family reunion at South Sound Speedway.”

In 2015, Joe began racing with the NW Pro4 Alliance Late Model series with Clint by his side as crew chief and spotter.

“I wanted to apply what we had done before,” he says of the path that got them to this point.

A path that weaved its way throughout the Northwest, including tracks in Coos Bay, Eugene, Lebanon, Roseburg, Spanaway, Monroe, Wenatchee, Yakima, Tri-Cities, Tenino, Post Falls, Meridian and the dirt in Medford. California tracks like Bakersfield, Yreka, Madera and Ukiah. Down to Phoenix and even racing for fun in Charlotte.

“My favorite times have been racing at Douglas County with my kids,” Joe reflects. “Racing with my boys was fun.”

With Joe back on the road following the NW Pro4 Alliance schedule, Debbie helped focus his racing efforts.

“He was the car builder and the driver and the crew chief,” she explains. “Now he’s just the driver. It’s what he likes the most.”

For this season, Joe and Debbie had a new car built by Chuck LaHorgue, a veteran fabricator with more than 200 cars built over the past 35 years.

“We just happened to be at the same race last year,” Chuck says of meeting Joe by chance, and taking the order for a new Late Model.

Chuck’s own Super Late Model efforts date back to 1986 and include the 2001 title at Shasta Speedway.

“I also ran some Modifieds on the asphalt,” Chuck says. “But after the championship I quit driving full-time.”

Joe and Debbie field the new car as the 55+, promoting their “Baby Boomers at Play” program. They share their current adventures with the NW Pro4 Alliance and encourage other seniors to do the same with their exciting activities.

For the younger set, Joe’s advice for drivers starting out is to work hard at marketing and not be bashful.

“We had to go out and get sponsors,” he explains. “Early on we tried racing hard, but we didn’t pursue the dollars we needed. We could have been more productive in the sponsor hunt.”

Four decades later, there were plenty helping out.

“Our customers became our friends and some became sponsors,” Joe says. “Like Tony Day. He liked the racing so we put his name on the car.”

Joe credits WSK Machine for all the engine work they’ve done over the past 25 years, but thanks Looper’s Auto Rebuilding owner Dale Looper for building the 2.4-liter Duratec engine in his new car.

“Dale is a great asset to the team,” Joe says. “He’s been helping me for two years now, with his machine work, engine work, crewing and engine tuning at the track.”

Chuck is also at the track helping Joe on race day.

“The car he built is awesome and he’s been doing a great job setting it up and tuning it at each race so far this year,” Joe says. “He is on the crew as long as he wants to be.”

More support comes from M&S Shelter, who assist with a workshop for the car, and Stayton Tire & Auto.

“They do all my tires,” Joe says. “They’ve really helped me out all the way back to my Mini Stock days.”

And Joe is grateful for the unfaltering family support.

“Debbie has been there since the beginning,” Joe says of his wife. “She’s always working hard, sacrificing, supporting and pushing to improve every step of the way.”

Encouragement from Debbie and the boys has helped keep Joe hitting the track at age 60.

“I just wish we could have done this when I was 30,” Joe sighs. “But we couldn’t do this at this level until now.”

He and Debbie are trying to squeeze all they can out of this opportunity.

“We’re not done yet,” he laughs. “We race for fun, but the winner has the most fun. That’s who we want to be.”

Racing veteran Joe and wife Debbie noticed they were growing a fan base due to Joe’s age and wanted to tie the brand new NW Pro4 Alliance car in with a project they were developing.

“Fans found out how old I am and I got a following of people my age,” Joe laughs. “We opened a lot of eyes.”

The car number was switched from 13 to a distinctive 55+ and they installed a GoPro camera to shoot videos of Joe in action.

“We want to engage people over 55,” Debbie explains of sharing their videos and encouraging others to do the same. “We want to help others share their adventures from mountain climbing to motorcycle riding.”

Their grandson Joshua, 9, has been tasked with handling the 55+ team’s online presence.

Joshua’s own racing includes Junior Karts and Mini Sprints, but he hopes to be a race car driver and designer when he is a few years older.

Perhaps grandpa Joe will still be out there giving him a run for the money.