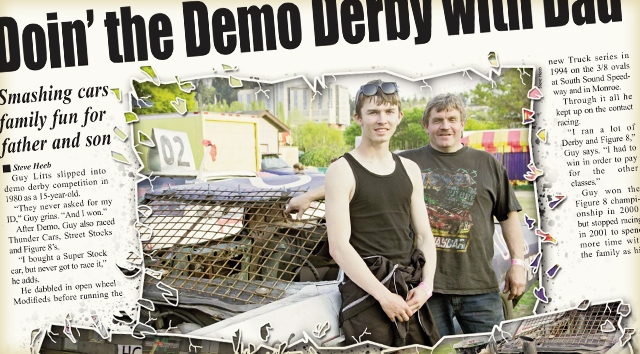 Doin’ the Demo Derby With Dad

Guy Litts slipped into demo derby competition in 1980 as a 15-year-old.

“I bought a Super Stock car, but never got to race it,” he adds.

He dabbled in open wheel Modifieds before running the new Truck series in 1994 on the 3/8 ovals at South Sound Speedway and in Monroe.

Through it all he kept up on the contact racing.

“I ran a lot of Derby and Figure 8,” Guy says. “I had to win in order to pay for the other classes.”

Guy won the Figure 8 championship in 2000, but stopped racing in 2001 to spend more time with the family as his children Shana and Eric were preparing for their own Quartermidget racing endeavors.

Eric started his Quartermidget training at age 4 and was on the track during the 2003 season.

“I originally started racing for fun at Paine Field,” Eric says of his start with the Washington Quartermidget Association. “As I got older I learned more of the strategies of racing.”

The family also started to include some non-paved venues to their schedule.

“When we moved to dirt it got easier,” Eric says. “Skagit is my favorite track because I love the dirt there.”

He acknowledges that different types of track require different skills.

“On pavement there is not a lot of passing because everyone is going the same speed,” Eric explains. “On dirt you have to be able to correct the mistakes that could cost you the race.”

In addition to Skagit and the now-closed Paine Field track, Eric has seat time at Yakima, Graham, Elma, Portland and the I-5 track in Vader. His racing resume also includes trips across the border to Langley, BC.

“The later years on dirt I got good at turning and adjusting to the track,” Eric says of the various places they raced. “I’ve improved my timing going into and through the turns.”

Eric notched two Quartermidget championships for the 2010 and 2011 seasons as well as a pair of Dirt Cup wins at Skagit Speedway.

Last season, Eric climbed into a car with a little more leg room.

“In 2014 I went to Evergreen Speedway and did two boat races with the Figure 8 cars,” he says.  “The bigger cars have a lot more horsepower. And a lot more crazy drivers.”

“In my second race I smashed the most boats,” Eric says of putting that horsepower to use. “That was fun.”

Eric lists uncles Norman and Ric, for whom he was named, among his greatest racing influences along with his father.

“My dad is probably the best driver I’ve seen,” Eric says of Guy and his return to driver’s seat.

Guy is fielding the No. 01 while Eric sports the No. 02 on his car in honor of the number uncle Ric ran when he was racing.

“They’ve been my biggest sponsor since I started,” he says.  “And Roger Schindler, who is always there to help with the cars.”

Right now, Guy and Eric are putting a Fig 8 car together.

When he’s not involved with his racing duties, Eric focuses on sports or his passion for architecture and engineering.

He pitches and plays left field for the Lynwood High School baseball team and competes in butterfly and freestyle for the school’s swim team. He expects his fellow LHS students can watch him play football in the fall, though they can always watch him racing at Evergreen Speedway through the summer.

“The other students think it’s cool,” Eric says of their reaction when they learn he races. “They wish they could do it.”