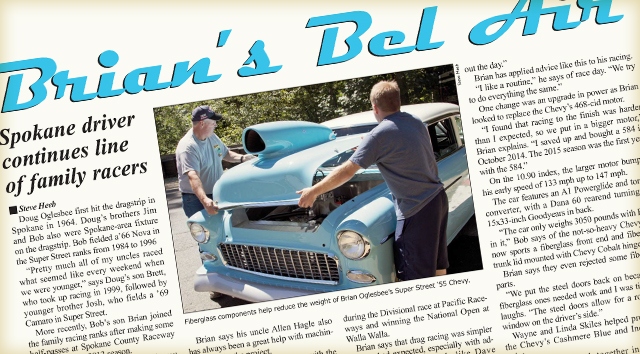 Doug Oglesbee first hit the dragstrip in Spokane in 1964. Doug’s brothers Jim and Bob also were Spokane-area fixtures on the dragstrip. Bob fielded a’66 Nova in the Super Street ranks from 1984 to 1996

“Pretty much all of my uncles raced what seemed like every weekend when we were younger,” says Doug’s son Brett, who took up racing in 1999, followed by younger brother Josh, who fields a ’69 Camaro in Super Street.

More recently, Bob’s son Brian joined the family racing ranks after making some half-passes at Spokane County Raceway at the end of the 2012 season.

“We went to the races a lot,” Bob says of taking Brian to watch the drag races even after he had stopped driving.

In 2008, Jim provided an opportunity for Brian to take up the sport.

“My brother wanted to sell his old race car and a lightbulb came on for Brian,” Bob says.

However, there was much to be done to the car once he got it, before it would be ready for the dragstrip.

“It needed a new roll cage and motor to fit the rules,” Brian says. The trio also changed the ladder bars and aluminum tin work. “The three of us have pretty much done the whole car except the upholstery.”

Brian says his uncle Allen Hagle also has always been a great help with machining parts for the project.

“We had to build new headers with the new engine,” Bob says. “We built them out of stainless because Brian wanted that. We had to learn all this.”

“I had the garage and we built the race car there,” Bob says. “It was pretty grass roots.”

Their efforts did not go unnoticed as the team received Best Engineered recognition for the Chevy during Brian’s first full race, the 2013 Divisionals at Firebird Raceway in Boise, and also took home a Wally for Best Engineered during the National event at Pacific Raceways later that season.

Other highlights for the 2013 campaign were a runner-up finish to Steve Lowe during the Divisional race at Pacific Raceways and winning the National Open at Walla Walla.

Brian says that drag racing was simpler than he had expected, especially with advice from racing friends like Dave Holmes and Scotty Wear.

“Scotty told me to take my time up there,” Brian says of not rushing through the staging process.

“Jody helped me understand how to dial/tune the car with the throttle stop and electronics,” Brian says. “And watch what the wind and weather are doing throughout the day.”

Brian has applied advice like this to his racing.

“I like a routine,” he says of race day. “We try to do everything the same.”

One change was an upgrade in power as Brian looked to replace the Chevy’s 468-cid motor.

The car features an A1 Powerglide and torque converter, with a Dana 60 rearend turning the 15×33-inch Goodyears in back.

“The car only weighs 3050 pounds with Brian in it,” Bob says of the not-so-heavy Chevy that now sports a fiberglass front end and fiberglass trunk lid mounted with Chevy Cobalt hinges.

Brian says they even rejected some fiberglass parts.

“We put the steel doors back on because the fiberglass ones needed work and I was tired,” he laughs. “The steel doors allow for a roll-down window on the driver’s side.”

“Wayne and I work together in the body shop at a local RV dealership,” Brian says. “We painted the car on a weekend.”

“I always do well there,” Brian says of the Boise track where he made his first full runs. “I feel comfortable there.”

Beyond the Northwest, Brian’s travels include Billings, Mont., and a very special Division 7 race in Las Vegas.

“The Las Vegas race was especially fun because my brother Joel Oglesbee was able to come home on leave from the Air Force,” Brian says. “We had never been to Las Vegas before so it was fun seeing all of the town and track.”

Brian was eventually bumped in the semi final to a fellow Division 6 racer Brad Vinje, though he remains as determined as ever.

“I like to keep going rounds and want to win one,” he says.

As Brian sets his sights on a first event win, his uncle is just pleased to have another member of the family taking up the sport he has been a part of for more than half a century.

“It’s great to have the second generation racing,” Doug says of Brian and cousin Brett.

Doug says that both Brian and Brett are both very competitive.

“They’re just like brothers – both are very serious racers” Doug laughs. “They enjoy racing each other and each wants to outdo the other.”

“There’s no one I want to beat more and at the same no one that I care losing less to,” Brett says of racing against Brian. “Pretty much the whole family enjoys racing and although we don’t like to lose to each other it is still a lot of fun to be racing against each other.”

As for the upcoming season, Brian says has not made any changes to the car.