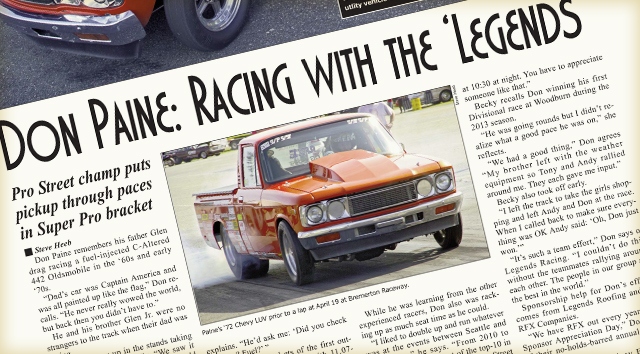 Don Paine: Racing with the ‘Legends’

“Dad’s car was Captain America and was all painted up like the flag,” Don recalls. “He never really wowed the world, but back then you didn’t have to.”

He and his brother Glen Jr. were no strangers to the track when their dad was racing.

“Us kids grew up in the stands taking pictures,” Don says fondly. “We saw it was a lot of hard work. Later we would be in the pits doing whatever the racers needed. Mostly carrying water containers.”

With his own family, Don’s foray into competition was put on hold for more than two decades after that.

“My wife Joy said: ‘Buy me a new house and then you can go racing,’” Don laughs, noting that it was her that actually paved the way for him to get back on the asphalt when she surprised him 8 years ago. “It was just a ratty old Chevy LUV pickup but I wanted it. One day she said: ‘Let’s go pick up your truck.’”

Don ran two passes in the truck the first night out and then promptly tore it all apart to build it right.

“My friend Pete and I put a roll cage in it and a ladder bar,” he says. “And my brother bought me a 383 stroker motor for it.”

As a former racer, Don’s father was right there helping with tires on race days, but also offering advice from his own experience.

“He’d make sure I kept track of how warm the motor and tranny were,” Don explains. “He’d ask me: ‘Did you check the tires? Fuel?’ ”

Don competed at Pro Street Association events on a 10.50 index, and was also running in the Pro bracket.

“I did OK and won a couple races,” he says of his two seasons before jumping to Super Pro. “It took two years, but I won the track championship in 2009.”

“Dale was the one that brought me to Super Pro and helped all the way,” Don says.

He also thanks Scott Randall for his guidance.

“Scott showed me the ins and outs of finish line racing,” Don says. “He made me pay attention.”

While he was learning from the other experienced racers, Don also was racking up as much seat time as he could.

“I liked to double up and run whatever was at the events between Seattle and Bremerton,” he says. “From 2010 to 2012 I averaged just out of the top-10 in Super Pro, but dominated the Pro Street in the double index class.”

That domination garnered back-to-back Pro Street titles on the 9.60 index.

In 2013, Don’s brother decided to make a run on the Division 6 circuit in Super Gas.

Don teamed up with Legends Racing, a four-car race group made up of his brother Glen Jr., good friend Tony Burton and the Lindsey family.

“Don is the go-to helper of the group,” Becky Lindsey says. “He’s always there for you if there’s a problem. He’ll drop what he’s doing and help out at 10:30 at night. You have to appreciate someone like that.”

Becky recalls Don winning his first Divisional race at Woodburn during the 2013 season.

“He was going rounds but I didn’t realize what a good pace he was on,” she reflects.

“We had a good thing,” Don agrees “My brother left with the weather equipment so Tony and Andy rallied around me. They each gave me input.”

“I left the track to take the girls shopping and left Andy and Don at the race. When I called back to make sure everything was OK Andy said: ‘Oh, Don just won.’”

“It’s such a team effort,” Don says of Legends Racing. “I couldn’t do this without the teammates rallying around each other. The people in our group are the best in the world.”

Sponsorship help for Don’s efforts comes from Legends Roofing and the RFX Companies.

“We have RFX out every year for a Sponsor Appreciation Day,” Don says of their no-holds-barred annual barbecue.

Don’s ’72 Chevy LUV still sports the stock frame and all-steel body, but the rest is built for the dragstrip.

He learned a lot on the way to where it is now, and encourages new drivers to seek help when they need it.

“Don’t be afraid to talk to any of the Legends Racing team for advice and parts,” he says. “Come on over and we’ll make it happen.”