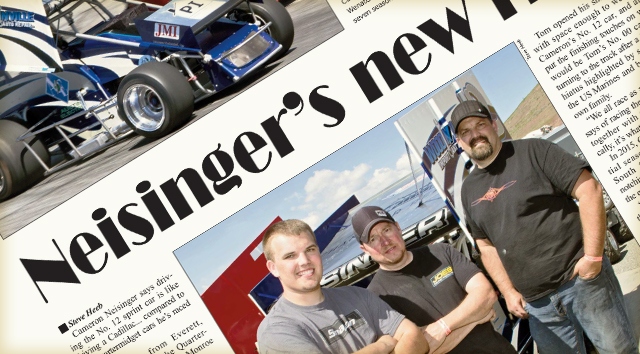 This feature article was published in the Midseason 2016 issue of Inside Track.

Cameron Neisinger says driving the No. 12 sprint car is like driving a Cadillac… compared to the Quartermidget cars he’s raced since 2009.

The driver from Everett, Wash., started in the Quartermidget ranks in nearby Monroe when he was 8.

“I did pretty well my first year,” Cameron recalls. “I finished in fourth place.”

Cameron moved up through the Quartermidget classes, winning a championship and staying in the top-5 throughout.

With Cameron on the verge of aging out of the Quartermidgets last year, his parents Scott and Tonya started looking around for something else he could race.

Family friend Tom Root suggested that they give one of his older sprint cars a try.

“He went out and lit the track on fire,” Tom says of Cameron in the larger sprint car. “He said it was easier to drive than his Quartermidget.”

Cameron says he and the family were hooked right away.

Tom purchased another roller so they could build Cameron a proper car that Cameron could field in the Washington Econo Sprint Car Organization.

“Tom already had one that we were going to put together and I would drive it,” Cameron says. “Then my dad decided to buy one.”

Tom opened his shop to them with space enough to work on Cameron’s No. 12 car, and also put the finishing touches on what would be Tom’s No. 00 car, returning to the track after a 15-year hiatus highlighted by service in the US Marines and building his own family.

“We all race as a family,” Tom says of racing the WESCO circuit together with Cameron. “Basically, it’s what we are.”

In 2015, Cameron logged a partial season, winning a race at South Sound Speedway and notching a fourth-place ranking by the end of the year.

“I’m so impressed with what that kid can do,” Tom says.

“It was a learning curve,” Cameron says of switching to the larger sprint car. “We were racing against teams that had plenty of experience.”

He thanks racers like Todd Coleman and Greg Middendorf for their support.

“They’ve been great mentors,” he explains. “I’ve learned to ask them for advice and they always give it.”

Cameron heeded all the counsel he could get as he moved up from the 1/20-mile bullring in Monroe to 3/8-mile paved ovals around the Northwest.

The smaller quartermidgets had been a lot tighter on their tiny tracks, but now he was logging laps at full-size circuits such as  Ephrata Raceway Park, Evergreen Speedway, South Sound Speedway and Wenatchee Valley’s Super Oval.

“Wenatchee is such a beautiful facility and well run,” Cameron says. “Their program is second to none. Well organized and always a good show.”

He says the family also might venture south to California later this season to compete on the half-mile oval at Madera Speedway.

The No. 12 sprint is a Beast clone powered by a cast iron 360-cid motor that produces more than 600 horsepower.

“We spent all winter rebuilding the engine to make it run better,” Cameron says. “The car feels pretty good now.”

He thanks friends and family for support, including his parents, sister Courtney, Chris Brostrom, Taylor Coleman and Tom Root.

When not prepping the No. 12 car for the 2016 WESCO campaign, Cameron works doing warehouse maintenance at Clean Crawls in Marysville, Wash.

This year, as a senior at Jackson High School, Cameron has been attending Edmonds Community College through the Running Start program.

“Racing… work… school,” Cameron laughs. “But I’m working on the car a lot.”

Set for his ninth season in racing, he appreciates the chance to spend time with his dad and friends Chris and Tom.

“Quartermidgets was a great way to spend time with family in a great sport,” he says of his WQMA seasons. “It’s a feeling of community. Basically, one big family.”

He would say the same for their WESCO companions.

“We had the outlook to just have fun,” he says of the jump to econo sprints. “We wanted to try and do well in our non-production car.”

After logging some seat time and turning laps at more venues, Cameron has refined his goals for 2016.

“After we really started focusing I got a lot more confident,” he grins. “We feel this year is going to be a lot stronger.”

“If we can keep him in a car, I think he is going to be one of the top drivers in the area,” Tom says with Cameron set to juggle racing and college responsibilities. “I race against him but I am excited to see what he does.”