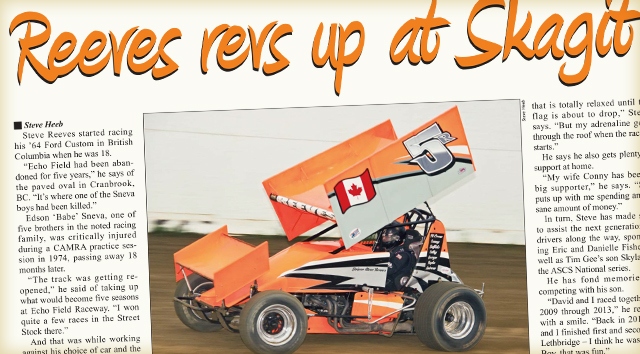 Reeves revs up at Skagit

Steve Reeves started racing his ‘64 Ford Custom in British Columbia when he was 18.

“Echo Field had been abandoned for five years,” he says of the paved oval in Cranbrook, BC. “It’s where one of the Sneva boys had been killed.”

Edson ‘Babe’ Sneva, one of five brothers in the noted racing family, was critically injured during a CAMRA practice session in 1974, passing away 18 months later.

“The track was getting re-opened,” he said of taking up what would become five seasons at Echo Field Raceway. “I won quite a few races in the Street Stock there.”

And that was while working against his choice of car and the availability of performance parts on a budget.

“Don’t even try to race a Ford,” he laughs. “It’s too expensive to make them go fast.”

A family move and work commitments led to a break from racing that lasted 25 years.

“Then my oldest son David started racing stock cars in 2006,” he explains.“It didn’t take long before I was back at the track with my own car.”

In the following years he raced on the pavement at Hythe Motor Speedway in Alberta and in the dirt at Tayor Speedway in British Columbia.

“My friend Bill Lanktree raced sprint cars and had been bugging me to try one,” Steve recalls. “My son tried it and bought one. I tried it and never went back – it’s four times the rush.”

So at the age of 50, Steve bought his first sprint car from veteran World of Outlaws driver Tim Gee.

“Tim helped me a lot,” Steve says of the assistance from Gee and Gee Racing. “Without him I never would have got the hang of it.”

He admits the experience on the pavement circuits had been much easier than the switch to driving his No. 78 Sportsman Sprint at dirt tracks like Skagit Speedway.

“You have to forget everything you learned in stock cars,” he says of the finesse needed in a sprint car. “You can’t let them hit you and you can’t hit anybody. You have to break all your old habits because they work against you.”

He says a driver can’t lift while racing a sprint car.

“As soon as you get off the throttle the car goes in the other direction,” he adds.

However, the open wheel cars prove to be more accessible than their full-fendered counterparts.

“Sprint cars are ten times easier to work on than stock cars,” he says. “Bill Lanktree just had a small bag of tools – that was all he needed to get through a raceday.”

When he made the move to 360 Sprints division, Steve he purchased a complete car that happened to be bright orange.

“I finished last but after the race the kids all gathered around my car more than the winner,” he smiles. “So I’ve kept this color all the time.”

His current ASCS 360 Sprint is built on a chassis from ART Speed Equipment.

Steve also thanks Skagit Speedway promoter Steve Beitler for allowing him to keep some of his racing equipment on site, rather than making a 13-hour haul from Valleyview, AB, to Alger, Wash., each week.

In addition to being fairly regular at Skagit, Steve also has seat time at Canadian tracks in Lethbridge and Edmonton, and US tracks in Montana and ­California, and has run the Speedweek events in Oregon.

“I like the track at Yakima too,” he says of State Fair Raceway. “It’s so fast.”

He does prefer a wetter track conditions at race time.

“I was always good on the sticky ones,” he smiles. “Stomp and steer is easy. Slick tracks require more finesse.”

He points out that he has been working to improve on that.

“I’m getting better at the slick tracks like Skagit gets to be by the end of the night,” he says.

Crew chief Steve ‘Buffalo’ Scribner and the crew – George and Cathy Noordegraaf, wife Conny and brother ­Andrew – all ensure the car is prepared to make it through the race, helping take pressure off of Steve.

“Actually, I am one of those rare guys that is totally relaxed until the flag is about to drop,” Steve says. “But my adrenaline goes through the roof when the racing starts.”

He says he also gets plenty of support at home.

“My wife Conny has been a big supporter,” he says. “She puts up with me spending an insane amount of money.”

In turn, Steve has made sure to assist the next generation of drivers along the way, sponsoring Eric and Danielle Fisher as well as Tim Gee’s son Skylar on the ASCS National series.

He has fond memories of competing with his own son.

He has a message to those looking to take up sprint car racing.

“Start out young because this is hard when you’re old,” he chuckles, having taken dirt track racing up when he was 50. “You’ve got to drive against some 14-year-old that doesn’t own a bolt in their car and has already been racing 10 years. They have no fear!”