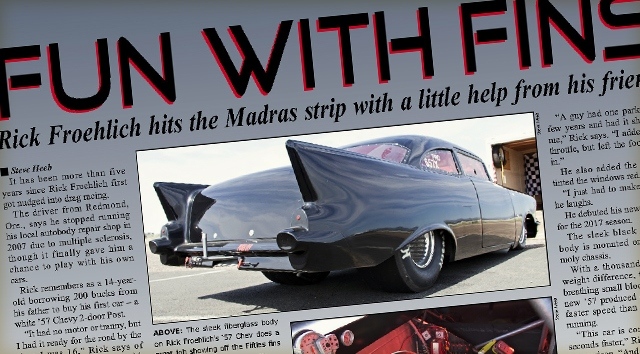 This feature article was published in the April/May 2020 issue of Inside Track. You can read the whole issue at this link.

It has been more than five years since Rick Froehlich first got nudged into drag racing.

The driver from Redmond, Ore., says he stopped running his local autobody repair shop in 2007 due to multiple sclerosis, though it finally gave him a chance to play with his own cars.

Rick remembers as a 14-year-old borrowing 200 bucks from his father to buy his first car – a white ’57 Chevy 2-door Post.

“It had no motor or tranny, but I had it ready for the road by the time I was 16,” Rick says of starting his passion for the mid-Fifties Chevrolets, with an affinity for the ‘57. “I just love the fins and the grill.”

All told, Rick has had several of these classics as street rods.

“My buddy Bill Ledford said I should give drag racing a try,” Rick recalls. “I finally brought my ’57 out to an Oldies event in 2014.”

Bill, who had been racing since he was 15, first met Rick in the Redmond 4 Bangers Jeep club. The extreme wheeling and rock crawling activities were quite different than the car show circuit.

“Rick always had hot rods for the car shows, but mine were for drag racing.” Bill laughs. “I told him it was like a car show, but once an hour you get to run it really hard.”

Friend Cliff Dwy, living within miles of the dragstrip in Madras, also encouraged Rick to take up racing.

Cliff recalls meeting Rick at a Cruz-in and offering advice to Rick about the carburetor on his ’57 Chevy.

“I knew he had a few nice cars and we started chatting,” Cliff says. “He wanted to know how to make his blower happy.”

“Bill and Cliff both have a tremendous amount of knowledge,” Rick says of the veteran racers.

Encouragement from Bill and Cliff finally convinced Rick to give it a try at the final nostalgia race in 2014.

“He brought his street car and has been hooked ever since,” Cliff laughs, recalling the days he first got hooked on racing as a 16-year-old catching rides to the dragstrip in 1968.

“That winter Rick bought a black ’55 Chevy from Doug Gray,” Bill says. “It was a street car just like the one in American Graffiti.”

The full-bodied, full-framed ’55 is powered by a 468-cid big block running on regular fuel. It uses ladder bars, even at a heavy 3,000 pounds.

“I thought maybe I could do this after all,” Rick said of getting his first taste of drag racing. “I was terrible, but I couldn’t believe I hadn’t started 30 years ago.”

“Rick made a great transition,” Cliff says. “He took his ’55 and really made it into a drag car.”

By the end of his first real season, Rick had won a race in his ’55, claimed Rookie of the year honors and was ranked fourth in the Sportsman points for 2015.

“I had no idea bracket racing was so in-depth,” Rick recalls of the early challenges, including his reduced muscle control from the MS. “I had to worry about syncing my legs.”

Rick’s second season caught up with him.

“I started overthinking,” he explains. “I knew I had to get a transbrake and hand throttle. I could have added them to my ’55, but I’m really a ’57 guy.”

An internet search provided just what he needed.

“A guy had one parked for a few years and had it shipped to me,” Rick says. “I added a hand throttle, but left the foot throttle in.”

He also added the grill and tinted the windows red.

“I just had to make it mine,” he laughs.

The sleek black fiberglass body is mounted on a chrome moly chassis.

With a thousand pounds in weight difference, the alcohol-breathing small block 377 in the new ’57 produced considerably faster speed than the ’55 was running.

“This car is consistently 1.5 seconds faster,” Rick says of the comparison. “And it is fun.”

A Powerglide tranny shoves power to the Fab9 rear end and out to the 32x14x15 Hoosiers in back.

Cliff’s mechanical expertise was called upon to help fine tune the new car.

“We really figured out how to make it work for him,” Cliff says of the new Chevy. “He asked me to test the new car to see if it would go straight.”

Cliff has been with Madras Dragstrip since 1986, and had a hand in building many of the cars and engine that race there.

“Cliff and Bill have both helped me dial in the car,” Rick says. “This car is so fast now.”

Rick says he is always learning, and especially improved his reaction times.

“He’s better on the lights for sure,” Bill adds. “With the new car Rick has been spot on. The transbrake in the car has made a world of difference.”

Having good folks helping also has made a difference.

“I have to thank my wife Jodi and her daughter Cori,” Rick says of his family support. “I couldn’t do this without them.

Rick also credits Trevor Osbon for helping out each week.

By late 2019, Rick had determined that Brutus was becoming more of a challenge.

“Brutus had a chopped top and a funny car cage,” Rick explains. “It was just getting to hard to get in and out of the car because of my legs.”

The struggle was sapping some of the appeal of competing.

“I’m not done racing yet, so the answer to the problem is a new car,” Rick says of building another black ’57 Chevy: Dirty Harry. “It will be even faster with this new 632 big block Chevy.”

Watch for the new car to make its debut when the Madras Dragstrip opens back up.

“I just come up here to have fun,” Rick says of making the 30-minute haul from ­Redmond to Madras. “It’s close to home so I save some money.”

“He doesn’t miss a race,” Cliff says, even though the physical challenge might stall someone less determined than Rick.

Rick’s philosophy: “You should try anything if there’s even a chance you can do it.”