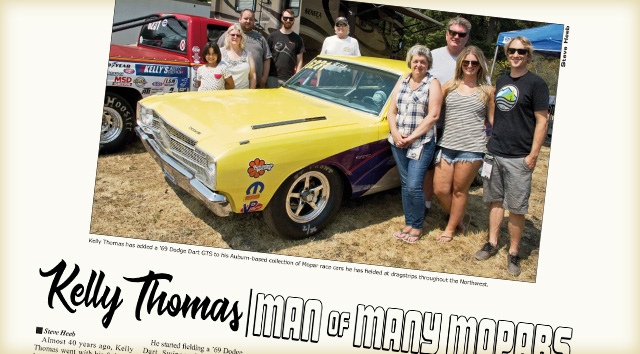 This feature article was published in the June/July 2018 issue of Inside Track.

Man of Many Mopars

Almost 40 years ago, Kelly Thomas went with his father to look at cars and picked up a ’65 Dodge Dart.

“That car smoked the right rear no matter what,” Kelly says of that six-cylinder four-speed.

At the time he was 16 and turning wrenches in auto shop at Montlake Terrace High School.

“Kelly was just looking for an open road,” shop teacher Skip Carlson recalls. “He was a super kid with a real love of cars.”

Skip also remembers the teachers going on strike and Kelly taking full advantage of the opportunity.

“The strike gave Kelly a chance to drive his car up and down in front of the school,” Skip explains.

Perhaps a little too much.

“I got caught street racing by a State Trooper,” he explains. “He gave me directions to the dragstrip and checked in on me for the next couple years.”

That bit of guidance put Kelly on the right track for good.

“Once I was here I never left,” he says.

He started fielding a ’69 Dodge Dart Swinger in the Heavy bracket at Pacific Raceways – then Seattle Int’l Raceway. He recalls being influenced by the Bertoldi brothers.

“John and Alan were the track champions back then,” Kelly says.

In 1989, Kelly turned laps in the Pro bracket with a ’67 Barracuda and notched two track titles in a four-year span.

Within a couple years another race truck found its way into Kelly’s Mopar stable.

“I found a ’94 Dodge Ram factory Mopar race truck in Louisiana,” he says. “I had it shipped up here on the back of a flatbed semi.”

The new pickup helped him pick up Divisional wins at Boise in 2008 and again in Seattle in 2012, as well as numerous top-qualifier postings along the way.

Around 2007, Kelly bought a ’73 Plymouth Duster to race in Stock Eliminator.

In 2013, he swapped out the original 340-cid and converted the car for Super Stock division.

“I put in a different 340 Super Stock legal motor,” he says. “Also a lightweight transmission and aluminum driveshaft.”

He added another Super Stock Dodge to the mix, this one a ’69 Dart GTS.

“It’s just a creampuff,” he says. “It drives perfect and works well.”

Under the hood beats a’73 340-cid motor with Edelbrock aluminum cylinder heads; factory carb and compression; and a T&D valve train.

Even with limited passes in the car by the NHRA Northwest Nationals at Pacific Raceways, Kelly was making 10.43-second runs at 126 mph.

“It’s my favorite,” Kelly says of the yellow Dart GTS. “But the truck is still part of the family.”

Kelly gets plenty of family support from wife Dawn, daughters Jessica and Pam and their husbands Brent and Kyle, respectively.

“I have to thank all the crew at Kelly’s Auto Repair, past and present,” he says. “Manager James Davis and the rest of the crew keep the shop running flawlessly while I am out doing this.”

He also is grateful for all the people who have helped throughout the years.

“I have a lot more good people around me,” he says of the personal friendships he’s developed through racing.

He’s also enjoyed a partnership with Mopar that has helped him race throughout the NHRA Division 6 venues and beyond, from north of the border at Medicine Hat Dragstrip in Alberta, Canada, and south to Pomona, Calif., and Top Gun Dragstrip in Fallon, Nev.

He appreciates all the support along the way and recognizes how things have changed for him.

“I used to mix my own fuel,” he recalls of his early efforts. “Now I order VP by the drum.”

On race day he might bring three of the 12 Mopars he owns.

“They are all great cars,” he says of his collection. “They stick with you for life.”

Beyond the machines, Kelly also recognizes the hard work needed to stay competitive in close brackets.

“I look up to any of the Stock and Super Stock Division champions,” he says, with advice for those new to the sport. “Just stay after it and don’t give up.”

Four decades after having curbed his street racing, Kelly enjoys the straight and narrow of the dragstrip.

“It’s a good clean fun sport,” he laughs. “Come on out and have a good time.”