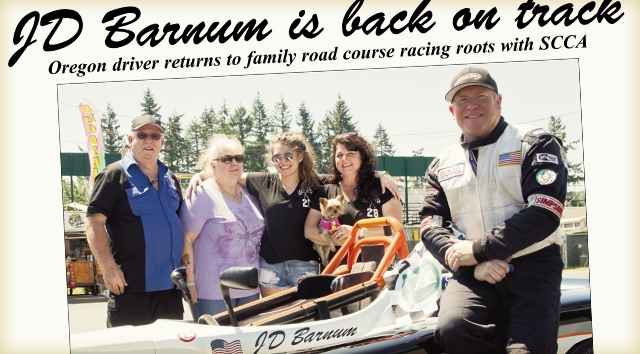 JD Barnum is Back on Track

JD Barnum was up on two wheels at the age of 5, riding a motorcyle for fun and watching his father John race, whose long-time SCCA membership dates back to the 1960s.

JD’s own passion for racing was fueled by experiences at the race track.

“My family and I spent our spring and summers watching guys like Frank Pool race Trans Am cars,” JD says of the Northwest veteran who would later play a role in JD’s racing efforts. “It set the foundation for my future – I knew I had to find a way to race, and I would race anything!”

That opportunity came riding a MR50 at Mulky Park in McMinnville, Ore.

“I raced BMX and Motocross for six or seven years until injuries pushed me into karts,” he says.

John eventually left the SCCA in order to travel to kart races with his son.

“Dad and I started racing karts in 1992 from Canada to California and spending many many hours practicing at Pat’s Acres Karting Complex where we used to have a key to practice any time we wanted.”

The dedication paid off and JD saw much success as the Novice Heavy champion for the Portland Kart Assoc. in 1995, and earned a pair of titles the following year in IKF Region 6 (representing Washington, Oregon and Idaho) for both the 80cc Road Race and 80 cc Sprint Kart divisions.

He moved to shifter karts and competed in northern California, posting second in the SKUSA points in 2000 and earning the NorCal title in 2002.

In 2003, JD made his last race in a 125-cc shifter kart, and the Barnums set their sights on building a car to run on the dirt track at Lebanon.

That plan changed when the family ventured north to South Sound Speedway to watch a race on the paved oval.

“We decided to keep the car an asphalt  Late-model, which could run in the ­Limited Late Model class or as a Super Stock,” JD says. “I loved the atmosphere there. They put on a great show.”

A year later, JD was putting on a good show too, driving his No. 2 Pontiac Grand Prix to a podium finish in his very first race there, even while getting used to a whole new type of racing.

“The karts were much faster,” he laughs.

And the differences were apparent off the track as well.

“The cars were so much work,” he explains. “We had to work on the car after each race. We really tore everything up.”

“We replaced a lot of metal and fiberglass for each race,” John says of repairs to his son’s Pontiac. “We had to make sure the car was looking good.”

“He really helped us with the Late Model,” JD says of the veteran he used to watch race. “He always has been big on our racing. It’s nice to hear from a guy with that kind of experience.”

Eventually the toll of weekly repairs caught up with the Barnum team in 2006.

“My first race at South Sound I had finished third and my last race I came in on fire,” he laughs. “We figured that was it.”

With the Pontiac done for, and a new child at home, JD took a break from racing for the next five seasons.

Seeking a form of racing more suited to the young family, JD turned to the SCCA that had been good for his father.

“Dad started as a Starter but spent most of his years as a Steward helping keep the races organized,” JD says of his father’s involvement on and off the track. “He was the Regional Executive for the Oregon Region SCCA in 1984 and was one of many that help bring the CART cars to Portland for the 1984 Stroh’s 200.”

It was great experiences like that which helped JD return to the family roots in road course racing.

“It just has more of a family atmosphere and that is what racing is to us,” JD says.

He picked up a used 1994-vintage Spec Racer Ford with a Gen 2 motor setup.

“I knew the SRF was competitive and could be run on a budget,” he says. “This is a race car that is very cost effective.”

In addition to being based on a very reliable chassis setup, JD notes that SRF is meant to be a driver’s class.

“We all have the same parts,” he explains. “Most of the races come down to only thousandths of a second apart.”

“This car is different,” John says comparing the SRF with the Pontiac they had fielded at South Sound Speedway. “Maintenance is low with the SRF. The Late Model was more work to repair damage and the SRF is more time on maintenance and set up.”

Working with the car set up, the Barnums were back in touch with Frank Pool.

“We still work with him,” JD says gratefully. “We call to get his thoughts on set-up ideas.”

Trading the ovals for road courses also meant a shift in driving philosophy.

“Instead of charging hard into the corners, now I look to carry speed through and out of the turns,” JD says. “There was a lot of contact in Late Models. In SRF the competition is extremely tight because the cars are so equal.”

The SCCA racing has brought him back to some of the Northwest road courses he had grown up with.

“Portland is convenient and I like the level of competition there,” he says. “And I like Pacific Raceways for nostalgic reasons.”

Though he and his dad take care of the car themselves, JD appreciates what Flat Out Racing has done for the group of racers scattered throughout the Northwest.

“They maintain virtually all the cars in the Portland area,” he explains, citing their extensive inventory. “They help keep the group strong by carrying parts so a guy like me can afford to go racing.”

He also thanks Mikki Rice for helping keep the family’s uniforms looking sharp.

On race weekends, JD’s pit area is populated by parents John and JoAnn, wife Rusti and their 16-year-old daughter Jaden, who comes to all of dad’s races.

“I am very thankful that  my wife supports our racing and is very involved because it takes everyone to make it happen,” JD emphasizes. “Yes, my dad and I do most of the work during the week, but come the weekend we have a large crew of family and friends that make it all happen and as a group we have fun.

JD’s sister ­Jennifer Colby and brother-in-law Mike are at most  events to help out, as is father-in-law Russ France.

And this group never goes hungry at the track.

“She’s good at everything,” Jennifer laughs.

The family’s racing efforts paid off in 2016 as JD had the kind of season many racers dream of.

He set three track records at Portland Int’l Raceway, won the SCCA Majors event there and picked up the Rose Cup championship. He also notched the Oregon Region champion as well as the NorPac title, representing the western states Alaska, Washington, Oregon, Idaho, California and Montana.

So, what does a defending Gen 2 champion do over the off season?

Swap out the engine and jump classes, of course.

“We’ve updated it with a brand new Gen 3 engine package and replaced everything in it,” he said during the SCCA event at Pacific Raceways in May. “But with the SRF we are always making forward progress. With the Late Model we were always working just to get the car back to the track.”